As the NFL season rolls along, fans are glued to their devices every Sunday. To watch the game? No. To check their fantasy teams? For sure. Fantasy football has become a nationwide phenomenon. Whether they play casually or are an expert, it’s fair to say that 99% of football fans have played in a fantasy football league of some kind over the years. However, other fantasy sports haven’t taken off the way football has. In this article, I’d like to show you a whole new world called fantasy basketball that I’d bet you’ve never encountered. Basketball is a growing sport, so why shouldn’t it’s fantasy fanbase?

Most fantasy leagues run on a head-to-head format. This just means you play another team in your league for a week and whoever’s players accumulate the most points over that week wins. I recommend this style, as it’s the simplest.

Basketball is a game of many statistics, and that’s no different in fantasy. For this section, I’ll be using ESPN and Yahoo fantasy as an example. The six basic scoring categories that are factored into ESPN and Yahoo fantasy are points, assists, rebounds, steals, blocks, and turnovers. Also, field goals attempted, field goals made, free throws attempted, and free throws made are automatically counted on ESPN. Any of these stats can be discounted at any time, but in most leagues this is the basic format. Here’s the default scoring for Yahoo and ESPN fantasy basketball: 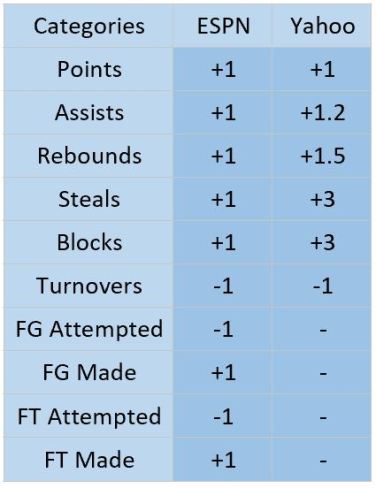 Auxiliary stats like triple doubles, three pointers made, and games played can also be counted if the league manager selects them. So, scoring in fantasy basketball really isn’t as complicated as people think, especially on Yahoo. It’s also highly customizeable, so you can decide what’s confusing or not.

There are many different types of players represented in this ranking. All-around players LeBron James, Giannis Antetokounmpo, and Nikola Jokic hold top spots. Big men who grab high volumes of rebounds, Anthony Davis, Karl-Anthony Towns, and Andre Drummond, also have a place. Scorers are also important as James Harden and Steph Curry are included. Finally, youngsters Ben Simmons and Pascal Siakam round out the top ten. I found it surprising that top players like Joel Embiid, Kawhi Leonard, and Russell Westbrook were left out, but this fantasy landscape is new to me so I won’t question it. As is in football, real-life greatness doesn’t always translate to fantasy greatness.

Also as is in football, sleepers are a big part of fantasy basketball. These players could win your league for you if you trust in them. Here are my top sleepers for this fantasy season.

De’Aaron Fox – Fox had a great season last year and he should improve even more this year. He’s the clear leader of an up and coming Kings team. Expect him to score and assist at a high rate on the way to leading your team to victory.

John Collins – Collins is a versatile power forward for the Hawks. He’s a great rebounder while being an excellent finisher. Having Trae Young dishing to him helps.

Shai Gilgeous-Alexander – This combo-guard gets it done in every way possible. He’s on the rebuilding Thunder squad, but it never hurts to have CP3 passing to you while Steven Adams sets the screens. Expect a leap year for Shai.

DeAndre Ayton – The former 2018 no. 1 overall pick is ready to breakout this season. He’s another great rebounder, which is a desirable quality in fantasy. The Suns added Ricky Rubio at point guard, which should also help his production.

Miles Bridges – On the dismal Hornets, Bridges is the bright spot. He should have a heavy workload with little help. It may not be a winning formula, but it’s a formula that will boost Bridges’ production.

Why You Should Play

Basketball is a growing sport with so many stars to boast. Why not root for these stars on the next level? My explanation for why people don’t play fantasy basketball is that it comes across as confusing and the duration of the NBA season also seems to be off-putting. However, as you can tell by my previous writing, the scoring really isn’t that complex. Plus, think of the long season as more opportunities to shine.

Also, big moves are more fun in the NBA than in the NFL, so why not exercise your desire to be a general manager on fantasy basketball? Fantasy basketball isn’t as limited as fantasy football in that basketball doesn’t disclude about 60% of players (defense and O-Line) so trades aren’t limited either. Building your own superteam has never been easier.

If this article hasn’t already pushed you to download a fantasy sports app and create a league, then I don’t know what will. As the game grows, so will its fantasy setting. Will it ever grow to fantasy football? Maybe not. But I think the NBA is the league of the future and if I ran the NBA, I’d put a lot of effort into growing the fantasy basketball community.

Dear Adam Silver, make fantasy basketball the phenomenon I know it can be!